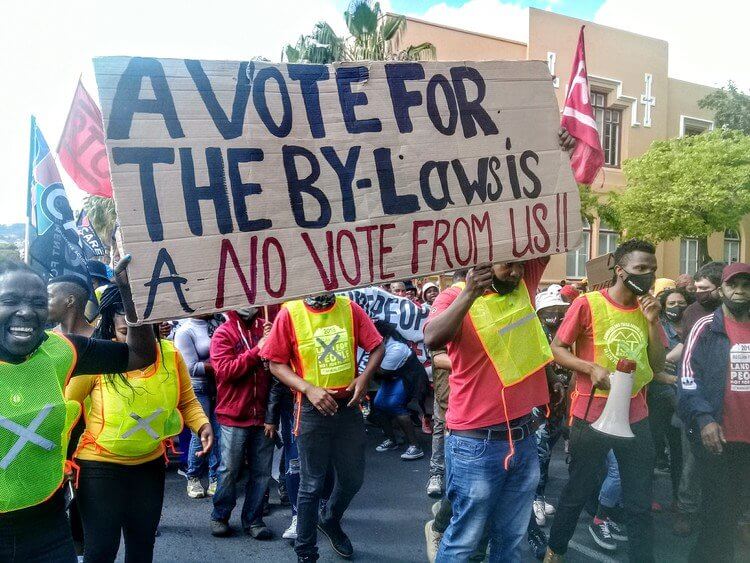 Access to ablution facilities, clean water and shelters for families were among the main issues raised by homeless people living in Cape Town’s city centre. This is according to a report by the Human Rights Commission (HRC) on homelessness in the city.

The report comes on the back of the City’s amended by-law that provides for compliance notices to be issued to people sleeping in public places. The by-law states that they must be offered alternative shelter, and that they are committing an offence if a reasonable offer for shelter is refused. Activists have condemned the amendments.

Researchers spoke to dozens of homeless people living in the Foreshore area and at the Company’s Garden between August 2021 and March 2022. The researchers also spoke to local businesses in the area as well as the Central City Improvement District officials, non-profit organisations, municipal officials and City Bowl landlords.

“If mindsets are not changed, the problem of homelessness will not be dealt with effectively because it will always be an ‘us and them’ approach … These people are human beings. They are part of our society and we need to embrace them,” said HRC provincial manager Zena Nair at the launch of the report last week.

According to the report, participants indicated that they are often unable to pay the R2 fee to use toilets at places like shopping malls and are therefore forced to relieve themselves in open public spaces.

The shortage of shelters able to accommodate couples and families with children was also highlighted in the report. “This has led to those who cannot find shelters at night resorting to erecting their own structures across the City,” the report read.

The HRC has suggested that the City use parking spaces as makeshift temporary shelters to accommodate homeless families at night. “People using these spaces would be advised to vacate the area during the day when it would be used again for parking,“ Nair said. The report recommended that these overnight shelters be fitted with mobile ablution facilities.

Commissioner Chris Nissen said there should be more focus on reintegrating homeless people into society. “We need more shelters to be built. We need to have the Department of Social Development enter the discussion of how we deal with families on the streets. Homelessness is not a Cape Town issue. It’s a South African and a global issue,” Nissan said.

In response to the report, Mayco Member for Community Services and Health Patricia Van der Ross said the City manages 147 public ablution facilities across the metro. This includes public toilets at bathhouses, public transport interchanges, cemeteries, parks and along the coast.

In his draft budget address, Mayor Geordin Hill-Lewis said more assistance will be given to homeless people. The City’s Care Programme budget, which is aimed at helping people off the streets, has been increased to R77-million from R65-million. An additional R10-million will go directly to increasing beds at shelters this winter, said Hill-Lewis. A further R142-million has been set aside to operate and expand the City-run Safe Spaces over the next three years.