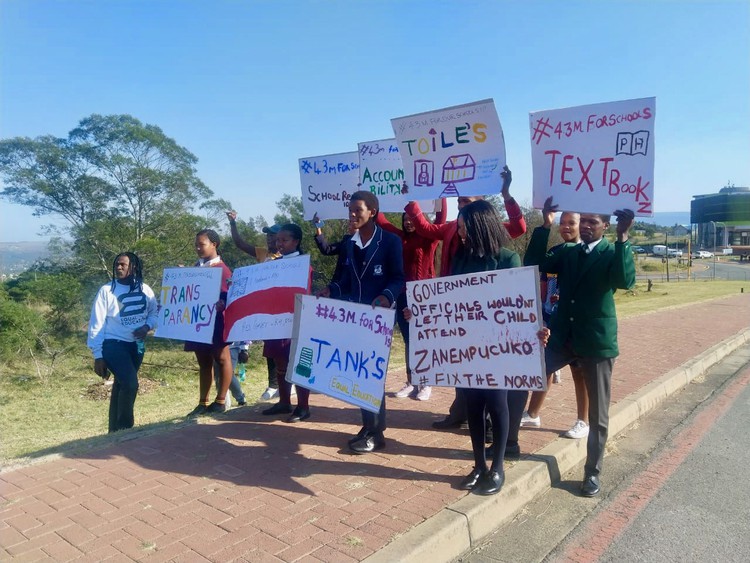 EE wants R4.3 million saved at this year’s official opening of the legislature to be allocated to fixing schools

On Friday, members of Equal Education picketed outside the Eastern Cape Legislature ahead of the State of Province Address in Bhisho.

Earlier this month, Speaker Helen Sauls-August announced that the address would be held in the chamber and there would not be the usual tent village outside, resulting in a saving of R4.3 million on the cost.

In a statement, EE said currently more than 2,000 schools in the province still have pit latrines; 197 have no access to water; 53 have no form of sanitation.

About 20 learners share one Maths Literacy textbook at Charles Morgan School near King William’s Town in the Eastern Cape, according to grade 11 learner Sibulele Mantye, who joined the picket. There are 60 learners in his class, he said.

Mantye said his school has only one teacher for Maths Literacy and she has to teach three grades.

He said in his school most toilets have broken seats and have no doors; learners relieve themselves in an open field near the school.

“Parents tried to raise money to fix some of the toilets but that didn’t help much because most parents did not contribute since they are unemployed,” he said.

Gcina Mtya from Qonce High, also in King William’s Town, said the school was short of classrooms. GroundUp wrote about conditions in Qonce in 2016 and 2017.

“Our voices are not heard and that is very frustrating,” said Mtya.

A memorandum was handed to Baphelele Mhlaba, Chief of Staff to Premier Oscar Mabuyane, who promised to deliver it to the Premier’s office.