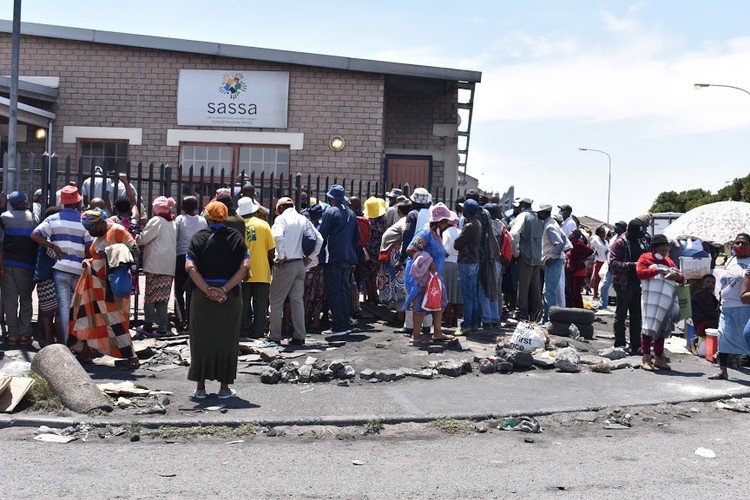 SASSA has proposed a ten-point plan to deal with backlogs

By Mary-Anne Gontsana and GroundUp Staff

As photographs of elderly and ill people queueing for social grants shock the country, the Black Sash has called on the South African Social Security Agency (SASSA) to extend disability grants to the end of March, and to take urgent steps to process applications.

GroundUp has reported how hundreds of beneficiaries, most of whom have illnesses, have been flocking to SASSA offices to renew their grants, with many resorting to sleeping outside the gates of the office to be first in line the next day.

The same scene has been seen all around the country as grants expire.

Medical approvals for disability grants approved before the first Covid-19 lockdown in March were extended for six months, but lapsed on 31 December, affecting 210,778 recipients. Beneficiaries in the Western Cape have been especially hard hit, with 51,000 people affected.

On Monday SASSA said it could not extend the temporary grants for another three months because this would cost R1.2 billion “The cost of continuing to pay these grants totalled in excess of R1.5 billion. To have continued payment of the grants until end March 2021 would have cost an additional R1.2 billion, which funds are not available,” said the statement.

But the Black Sash has contested these numbers. The Department of Social Development and SASSA budgeted R24.4 billion for disability grants and still had R12.9 billion left in October, says the Black Sash. “It is highly unlikely that all these funds would have been spent between November and December 2020. SASSA has the funding to extend the temporary Disability Grants for at least three months, until March 2021. This will present SASSA with a window of opportunity to resolve their system and capacity challenges to deal with renewals for the lapsed and new disability grant applications safely and timeously without infringing on the right to social security.”

SASSA has proposed a ten-point plan to address the backlog, including a booking system for screening and assessment, phone calls to beneficiaries, bringing in additional doctors and setting up new assessment sites, better queue management and more staff. “SASSA Head office has committed to providing sufficient funding for the implementation of these plans,” said the agency in its statement.

The Black Sash slammed SASSA for failing to explain how the backlog would be dealt with, pointing out that in July SASSA had warned that assessments by medical officers had already been been reduced from 40 to 20 a day. “It is unclear at this stage how effectively and safely SASSA will process lapsed and new disability applications during this resurgence of a more potent strain of Covid-19 and with reduced capacity to perform medical assessments,“ said the Black Sash.

The organisation called on SASSA to reinstate and extend the temporary grants for three months, to make SASSA offices dedicate two days a week to deal with disability grant applications and to speed up the medical assessment system. While people waited, they should benefit from Social Relief of Distress grants, said the Black Sash, and SASSA should also set up a task team with government and civil society representatives to resolve the crisis.