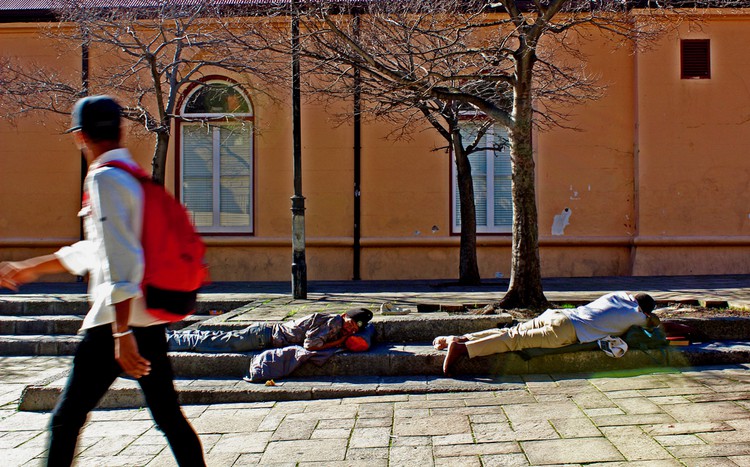 An urgent application by seven homeless people to have Cape Town’s Mayor, a member of the Mayoral Committee and the City’s head of safety and security imprisoned for 30 days for contempt of court will be heard in the Cape High Court on 26 September.

Lawyers acting for the seven will argue that Mayor Dan Plato, Mayco member for Safety and Security JP Smith, and Cape Town’s executive director of Safety and Security, Richard Bosman, are in breach of a 5 September court order in which the City of Cape Town undertook not to confiscate their personal property or to harass or abuse them.

The order also extended this undertaking to include other homeless people living on the streets of Cape Town. The seven had gone to court after accusations of sustained harassment and fining of street people in Cape Town using the 2007 Streets, Public Places and the Prevention of Noise Nuisance and the 2009 Integrated Waste Management bylaws.

Lawyers acting for the City argued at the time of the first urgent application that there was not sufficient time to respond. Instead, they negotiated an agreement, which was then made an order of the court. It was intended to remain in force until the matter could be heard in November.

The new urgent application for Plato, Smith and Bosman to be imprisoned should be suspended until the November application had been determined, Lucien Lewin, the lawyer acted for the seven, said in papers.

The primary purpose of the court application appears to be to get the respondents to order their officials to stop confiscations and the harassment of homeless people, rather than to actually have them imprisoned.

Carin Gelderbloem ended up on the streets eight years ago after her husband died and she could no longer afford the rent on her home.

On 10 September, just five days after the order was granted, the cardboard she used to sleep on and two bags of donated clothes were confiscated by members of the Green Point and Oranjekloof City Improvement District officials and a City official, she alleges. She was sleeping on cardboard as her sleeping bag had previously been confiscated.

“I tried to argue and informed them of the court order but was ignored,” Gelderbloem says.

Two nights later, while she and a group of homeless people were sheltering from the rain outside St George’s Cathedral, she says they were approached by CCID officials and told “to move and go back to where we were born.”

“I politely informed them that Mark Williams (a field worker for CCID) had told me that CCID could not move us when it was raining. They ignored my pleas and forced us to move into the rain,” says Geldebloem.

“I told them about the order, and that they could not do this to us, but was immediately told by one of them that it was not his business. It was clear to me that these CCID members were not informed by the City about the order.”

Interviews with other homeless people around Cape Town revealed that they too were facing harassment and the confiscation of their private property, says Geldebloem.

Caryn Gootkin, an activist and board member of Souper Troopers, a non-profit organisation that works with street people, said in an affidavit that she had confronted law enforcement officials who had been ordered to remove structures built by homeless people at Die Bull on Upper Orange Street.

“I then asked them whether they knew about the high court order which was granted …and prevented the City from confiscating the belongings of homeless people,” says Gootkin in her affidavit.

“They replied that they did not know of any such order. I also asked them whether they knew JP Smith (the third respondent). They advised me that he was their boss, and that they, therefore, took instructions from him. … they told me that they were not management and that they did not ‘make the rules’. They were only tasked with enforcing them, which included taking the structures down and instructing the owners of these structures to throw them away.”

The City was asked to respond to the allegations but had not done so by the time of publication.