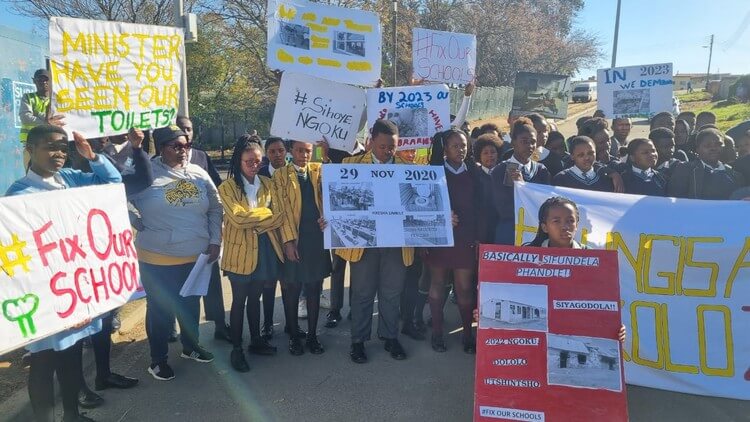 Scores of learners and Equal Education members donned their school uniforms on Wednesday and marched to the Eastern Cape Department of Education in Zwelitsha.

They are opposed to proposed amendments to minimum norms and standards for public school infrastructure. Under the new draft amendments, deadlines have been removed for when government must eradicate pit latrines and provide basic services such as water and electricity.

The department extended the deadline for public comment from 10 to 31 July. The original deadline fell within the current school holiday period.

On Wednesday, grade 12 learner Gcina Mtya read out a memo to a crowd of over 60 learners and Equal Education members. She said, “Nearly four years after the [Bisho High Court] case, the Department of Basic Education is finally ready to change the law. But it’s also proposing drastic and unacceptable changes in infrastructure laws that would result in schools falling apart for many more years.”

The memo criticised national and provincial governments for their failure to eradicate pit toilets in schools. Mtya also noted the importance of having safe and proper school infrastructure, among other provisions such as access to meals, textbooks and transport.

Equal Education’s Itumeleng Mothlabane said that without deadlines it would be more difficult to hold the department accountable. “We are here to say to Eastern Cape Education MEC Fundile Gade, [he] must put pressure on [Minister Angie] Motshekga so that these deadlines are not done away with,” said Mothlabane.

She said there are more than 1,500 schools still with pit toilets and the department is far from meeting the court’s deadline to eradicate them.

Mothlabane blamed Gade, the MEC since 2019, for not ensuring that municipalities provide infrastructure for water and sanitation at all schools. “He is holistically responsible for schools. If the problem is water, he is responsible for liaising with the municipality to ensure that the school has water,” she said.

The learners’ memo was accepted by the provincial government’s Chris Mdingi on behalf of Gade.