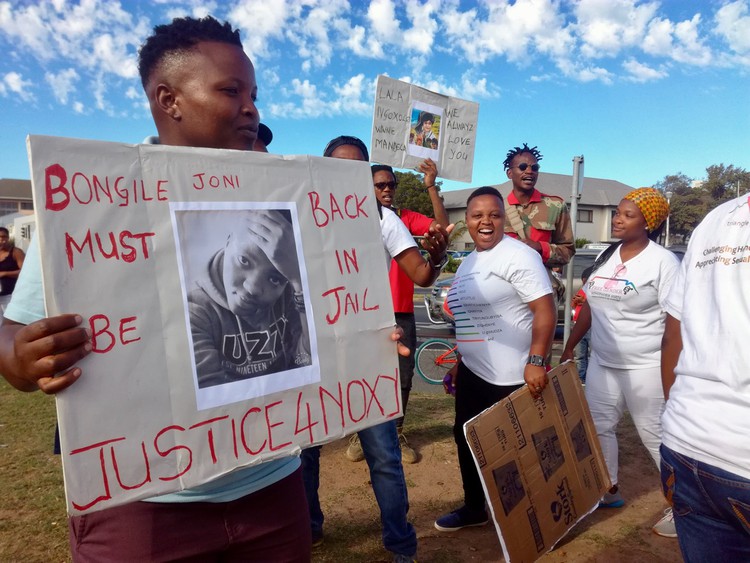 Bongile Joni pleaded guilty on Thursday in the Strand Magistrate’s Regional Court to the murder of Noxolo Xakeka. Magistrate Franselien Mouton sentenced him to an effective eight years in prison.

The murder took place on 1 January. Joni gave his version of events to the court on Thursday: “I unlawfully murdered the deceased by stabbing her with a knife”. He described how he intervened in a fight between his brother and another group of people at a local shebeen. Joni said that this intervention led to him getting beaten and cut in the neck by Xakeka with a broken bottle.

Joni said that when he went back to the shebeen after running away, he accosted Xakeka and asked her why she stabbed him. When she didn’t reply, Joni then stabbed her twice, in her neck and chest. “I was mad she didn’t seem sorry for what she did.”

Both Joni and Xakeka went to the same hospital, where Xakeka died from the stab wounds.

Joni appeared in court three days later and was let off with a warning while a trial was set.

Triangle Project and Free Gender have held protests at the court and circulated a petition asking that Joni be denied bail. The organisations were concerned that the murder may have been a hate crime because Xakeka was lesbian.

But the presiding prosecutor said that authorities spoke with Xakeka’s girlfriend and confirmed there was “no issue” between the Xakeka and the Joni. He went on to say, “It was never the intention of the accused to murder the deceased because of her sexual orientation.” Joni also noted in his testimony that he knew Noxolo and they “got along”.

Mouton accepted Legal Aid lawyer Wayne Hancock’s request to sentence Joni under compelling circumstances based on his admission of guilt, proclaimed remorse, R8,000 payment to Xakeka’s family for funeral costs, and the fact that he was a first time offender.

Mouton sentenced Joni to 12 years in prison, four years suspended for five years, effectively resulting in an eight-year sentence rather than the minimum of 15 years for murder.