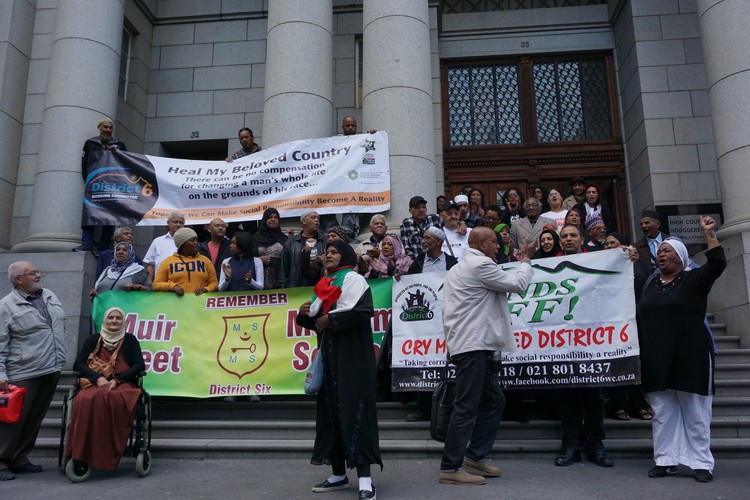 The Minister of Rural Development and Land Reform has promised, once again, to deliver a finalised District Six redevelopment plan in three months.

The Minister, Maite Nkoana-Mashabane was ordered last year to provide a plan by February this year. She missed this original three-month deadline. She then failed to appear in court last month to address the delay. (Read this News24 report from April for further background.)

Nkoana-Mashabane appeared in the Western Cape High Court on Friday to explain why she should not be held in contempt of court and to address District Six claimants with her plan for their restitution. About 90 claimants sat in court for six hours listening to Nkoana-Mashabane answer questions.

“The people of District Six … despite having the Minister of Rural Development and Land Reform in the box for the whole day, still have no idea when they’re going to get their units,” said the claimants’ lawyer Nicki van’t Riet.

Nkoana-Mashabane promised to deliver the final plan for restitution in August, but she refrained from giving a date for when she will be able to comply with the court order of restitution for all District Six claimants, who have been waiting decades.

In 2012, then President Jacob Zuma had promised restitution for District Six claimants by 2014. Yet currently, only 139 houses have been built, whereas 1,200 are needed, according to van’t Riet.

Nkoana-Mashabane repeatedly stressed financial budget constraints as a major barrier to development and a reason for the delay. A total of R11 billion is required for the full development of District Six, but the department is only capable of contributing R351 million, she said. She has yet to provide a concrete plan for how she will receive the needed funding.

“We are not saying it’s too expensive — we’re saying we need more resources,” Nkoana-Mashabane said.

Acting Judge Tembeka Ngcukaitobi asked Nkoana-Mashabane if her three-month deadline is “just another thumbsuck or actually based on scientific information,” as she could not provide an explanation for how she determined that three months would be sufficient.

Toward the end of the session, Nkoana-Mashabane admitted that she had not listened to the claimants enough before. She said, “I have realised we [the department] haven’t made as much progress as we should have.”

Heads of arguments have yet to be filed, and Ngcukaitobi is still determining the next court date during which he will deliver his judgment. Nkoana-Mashabane is required to report back to the court on her progress toward compliance in eight days as part of a structural interdict.

“Today was evidence enough that although the wheels of justice has been turning slowly, it has been turning,” said chairperson of the District Six Working Committee Shahied Ajam. “We are coming near to the end where we hopefully will find closure very soon so that the people can heal.”