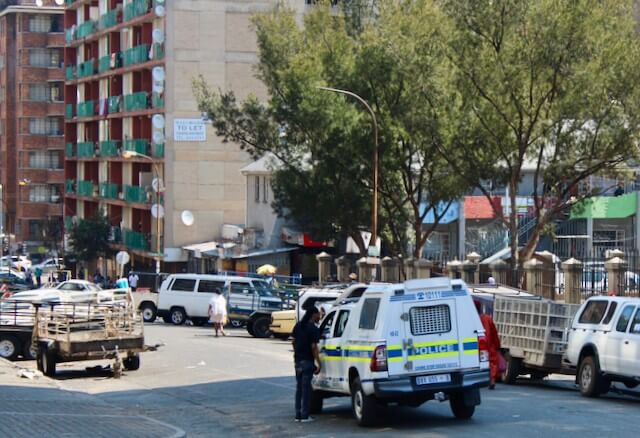 Police are accused of taking advantage of the country’s “dysfunctional” asylum and documentation system that has left many immigrants with irregular and expired permits or no documentation at all.

The immigrants we spoke to said that police threaten them with arrest, and extort cash or goods to look the other way. If the immigrants are arrested, police demand bribes to release them from custody.

Victims are unlikely to report police because they fear deportation.

Undocumented immigrants are even too afraid to seek assistance or to report any crime, because they fear the police will victimise them, said Tumelo Mogale of Lawyers for Human Rights’ Detention Monitoring Unit.

Mogale said the asylum system is “dysfunctional”; “the process is very onerous” and 90% of asylum applications are rejected anyway.

Zimbabwe Isolated Women in South Africa (ZIWISA) says frequent police raids in the inner city of Johannesburg were characterised by extortion, bribery and brutality against undocumented immigrants from Malawi, Mozambique and Zimbabwe.

Ethel Musonza of ZIWISA said they received numerous complaints from immigrants of assault and extortion, some involving large sums of cash, as well as taking mobile phones and other valuables in the aftermath of several raids on buildings around Faraday, Jeppestown, Marshalltown and Doornfontein in November. About 200 immigrants, mostly men, were arrested in the raids, she said.

Musonza said that many of those arrested say they paid bribes of up to R3,000 to be released. GroundUp spoke to immigrants who shared this experience. They were issued with a notice saying they had been detained as an “illegal immigrant” and informed of their constitutional rights. No receipts were issued for the money paid for their release.

Joseph Mvero, a social worker at ZIWISA, said, “It is worrying that the abuse of migrants by police is continuing … They are gripped by fear and lack of confidence in the police institution and cannot turn to them for help.”

GroundUp reported on these extortion allegations in September when police stepped up raids in Johannesburg’s inner city suburbs. We now spoke to a number of immigrants whose homes were raided during November. They made similar allegations.

Beauty* said she arrived home to see police searching her place. Afterwards she discovered that money she had kept in the house was gone. She did not report the missing money. “Going to the police with no documents is as good as turning oneself in. I had no choice but to let go,” she said.

Rashid, who has lived in South Africa for 12 years, said police broke into his home while he was sleeping. They took his cellphone and cash before arresting him. He then paid R1,400 to be released.

“They claimed that I was an illegal immigrant, but later released me after paying the bribe. I was very confused,” he said.

Maria said her husband was arrested but released after paying R1,000. A cellphone was taken by police during the raid and never returned.

“Reporting [this] was out of the question because we are foreigners with no papers. We are only happy that my husband is back,” she said.

“There is no law which entails that a person should have documents before approaching SAPS for assistance or to open a case at the police station,” said Mogale.

“The state has a duty to investigate whether there was a crime committed or not, regardless of whether a person is a South African citizen or not, documented or undocumented.”

Unfortunately, many immigrants are not aware of this right, he said. 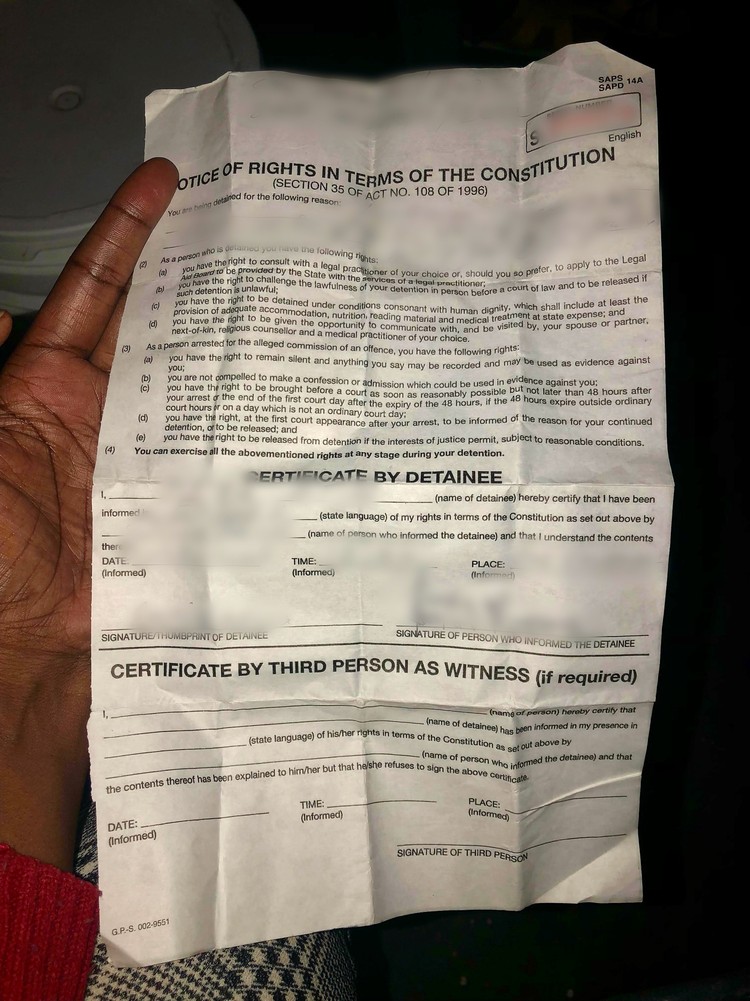 ​​​​​Arrested undocumented immigrants are issued this form informing them of their rights, but bribes are extorted at the same time, says an immigrant organisation. Photo: Kimberly Mutandiro

Police spokesperson Captain Mavela Masondo confirmed that police are continuing with the operation we reported on in September, as well as “Safer Festive [Season] operations”.

“With regards to undocumented foreign nationals we are partnering with Home Affairs. People should report any wrong doing by police at the nearest police or at the IPID [the Independent Police Investigative Directorate]. Remember as police we do not investigate ourselves which is done by IPID. A case can be opened, then investigated by the IPID.”

“Although undocumented foreigners may be arrested for not having documents they have the right to report,” said Masondo.

*To protect the individuals involved we are not giving full names.