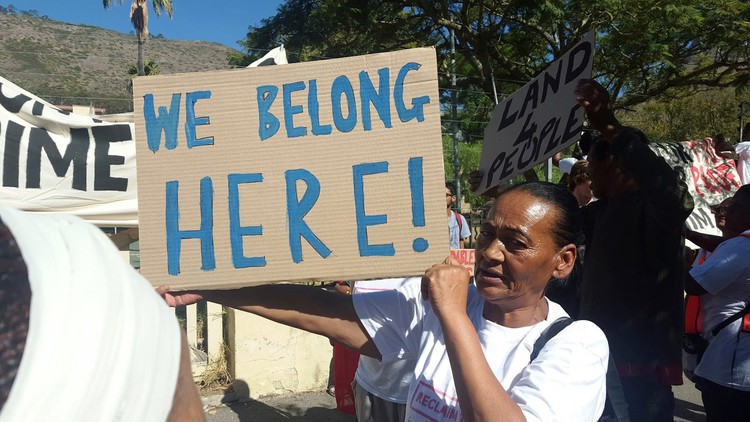 Three parcels of public land stand out from recent land contestation in Cape Town. One is the King David Mowbray Golf Course. One is the Tafelberg Site in Sea Point. And the other is an occupied plot in Ethembeni, Khayelitsha. Two of these sites were considered “surplus” by the state and put up for disposal — one sold for R135 million and the other rented out for less than R1,000 a month — while the third arguably demonstrates that there is no such thing as “surplus” when it comes to the social value of land in Cape Town.

On the surface, these sites don’t have much in common: they are vastly different in size, location, existing infrastructure, and property value. Two are well-located and the third is peripheral. Yet they are all state-owned and each is urgently needed for housing. As such, they have become highly contested pieces of the complex puzzle that is tackling spatial injustice in Cape Town. In a landmark judgment delivered on Monday 31 August, the Western Cape High Court confirmed that the simple word “surplus” is central to putting that puzzle together.

After four years of struggle, activists are finally celebrating a victory that not only avails an important piece of public land for the possibility of social housing once more, but also stands to shape how we tackle spatial injustice going forward.

According to Section 5 of the Government Immovable Asset Management Act (GIAMA), an immovable asset “becomes surplus to a user if it does not support its service delivery objectives at an efficient level and if it cannot be upgraded to that level”. Only surplus public land can be disposed of and before disposing of an immovable asset, GIAMA requires a custodian to consider whether it can be used by any other part of government for its social development initiatives or core socio-economic objectives. These include “land reform, black economic empowerment, alleviation of poverty, job creation and the redistribution of wealth”.

This is what Reclaim the City and Ndifuna Ukwazi argued did not happen in the case of the Tafelberg property. We challenged the Western Cape Provincial Government’s decision to sell the Tafelberg site on multiple grounds, one of which is that it did not follow the requirements outlined in GIAMA. If it had, Tafelberg would have been made available to any of the various government departments that expressed interest in using it for the development of social housing. These include the Social Housing Regulatory Authority, the Western Cape Department of Human Settlements and the National Department of Human Settlements.

In last Monday’s judgment, Judges Gamble and Samela upheld this argument. In a groundbreaking interpretation of the legislative framework enacted to support sections 25 (access to land on an equitable basis) and 26 (access to housing) of the Constitution, they have affirmed the principle that has been at the centre of Reclaim the City’s campaign: land for people, not just for profit.

The court’s reasoning has real significance for a number of other issues that have recently made headlines. For example, when it came to King David Mowbray Golf Course, the City justified the proposed lease — a form of disposal — by arguing that the land is “surplus”, not needed for “the provision of a minimum level of municipal services” and that “no demand exists” for this land. The claim clearly fails to recognise the City’s obligations when it comes to advancing access to housing and redressing spatial apartheid — interrelated obligations which the Court in Tafelberg found the City had breached.

This is some of the best public land in the City. It is close to great hospitals, top performing schools, and public transport nodes (including two train stations and taxi routes) – making it perfect for the development of affordable housing. It sits directly alongside Rondebosch Golf Course, which is on another piece of prime public land that Reclaim the City has actively campaigned for, and its proposed renewal drew in 1,600 objections in under a week. It even falls into one of Cape Town’s Urban Inner Core and Integration Zones, where spatial restructuring, spatial transformation, public and private investment, integration and densification are prioritised in terms of the City’s own housing policies and strategic plans.

In the Tafelberg judgment, Judge Gamble referred to the old adage “they’re not making land anymore” and confirmed that public land is a “most valuable resource which enjoys constitutional protection and must not be disposed of without sound reason”. In this context, the state can no longer take a narrow view on the use or value of land, selling key sites for short tern capital gain or continually renewing exclusionary leases with no apparent attempt to reprioritise around the actual needs of residents. it needs to consider how its land assets can be activated to deliver on all its obligations, including housing and promoting equitable access to land.

There is no question that these obligations are urgent. While we argued over whether these two sites of well-located, public land were “surplus”, hundreds have been demonstrating through their actions that there is desperate need for land in Cape Town. Ordinary people whose struggles have been hidden from the public are coming to the fore as they occupy vacant pieces of land in the townships and organise to defend this choice.

Ethembeni in Khayelitsha is one example of where this has occurred. It has been a battleground for months now, apparently torn between the City holding on to this parcel of land for other uses, and the real need for land to live on since Covid-19 disrupted already precarious income streams among poor and unemployed people. The City argues that these are politically-motivated land invasions, but most occupiers — many women, often mothers — say they act as non-partisan community members first. If there is any vested interest in disrupting the status quo, it emerges from poverty, not political affiliation.

Overburdened socially and environmentally, land on the periphery has been made to carry too much for too long, while the centre remains largely undisturbed. Spatial injustice remains a core structural factor in rising inequality and one of its key drivers is the cost of suitable land for affordable housing in well-located areas. If this is the case, why are we disposing of prime, well-located land that we already own?

Of the two sites considered by the state as “surplus”, one is almost an entire city block while the other is roughly the size of a small suburb. They provide excellent opportunities to redress spatial apartheid through the provision of well-located land for social and affordable housing.

Tafelberg encourages us to look not only at the problems on particular parcels of land, but at the possibilities and connections between them. The judgment has affirmed that the Province and City have obligations to combat spatial inequality and promote spatial, racial and economic inclusion. The golf course campaign demands greater imagination from, and coordination between, government actors when it comes to fulfilling these obligations. Both sites are connected to Ethembeni because that’s where the consequences of us failing to do so play out.

Kyla Hazell is a popular educator for Ndifuna Ukwazi and Nkosikhona Swartbooi is the former head of organising at Ndifuna Ukwazi.

Opinions expressed are not necessarily those of GroundUp.