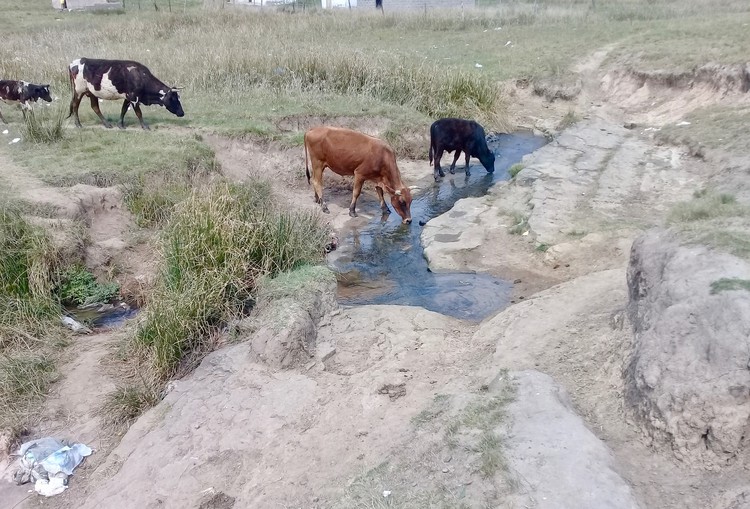 Upper Xhwili near Mthatha has no electricity, piped clean water or decent roads

Residents of Upper Xhwili village have been waiting since 1998 for electricity, access to clean water, and proper roads. The villagers say they have raised these issues with five successive councillors, but there is no progress.

Upper Xhwili is 40km outside of Mthatha. Before the villagers were forcibly removed and the village demolished in the 1960s during apartheid and the homelands era, it had its own church and a school – Luzini Junior Secondary School.

Families started to claim back the land in 1996 and to rebuild their community. There are now about 30 households. They keep cattle and grow vegetables. Most are elderly, without jobs, and dependent on social grants.

Nearby villages, Tshayina and Mkhwezo, have access to clean water and electricity, although Tshayina residents complain that their taps run dry and they have to use water from a river.

The nearest clinic is far from Upper Xhwili. Village headman Mzikayise Mfenguza said, “Old people are struggling to go to the clinic and get their medication because it is too far, and the transport is sometimes scarce.”

“The mobile clinic van goes to Mkhwezo to deliver medication for patients … We have tried to make arrangements that they should also come here, but they have not,” says Mfenguza.

The gravel road to the school is almost impassable and taxis will not use it. Children walk about five kilometres to get to school. Children leave home around 6am.

Nozimasile Mxwila has two children who have completed matric, but she says they are both sitting at home doing nothing. “They do not know how they can get into tertiary [education] … My biggest fear is them ending up being involved in crime.”

A ward committee member said they have been trying to get Eskom to electrify the village since 2000. “Eskom people came in 2016 to do a survey of the area and nothing was communicated after that.”

“We were told by the King Sabata Dalindyebo Local Municipality that our area is not in their plans to install water yet because they are lacking funds,” said the committee member.

Municipal spokesperson Sonwabo Mamponza referred GroundUp to the ward councillor. But residents vouch for ward 31 councillor, Xolani Mbhongwana (ANC), and say he is doing his job, submitting their requests to the relevant departments, but unfortunately the services do not actually come to the people.

GroundUp has tried since 17 October to get King Sabata Dalindyebo Local Municipality to respond to our queries as to when electricity will be brought; when the village will get piped water; why the mobile clinic only goes to the neighbouring villages; and what is the reason the municipality cannot provide the village after 20 years with any of the above. We get no response.