What does the Constitutional Court’s judgment on protests mean? 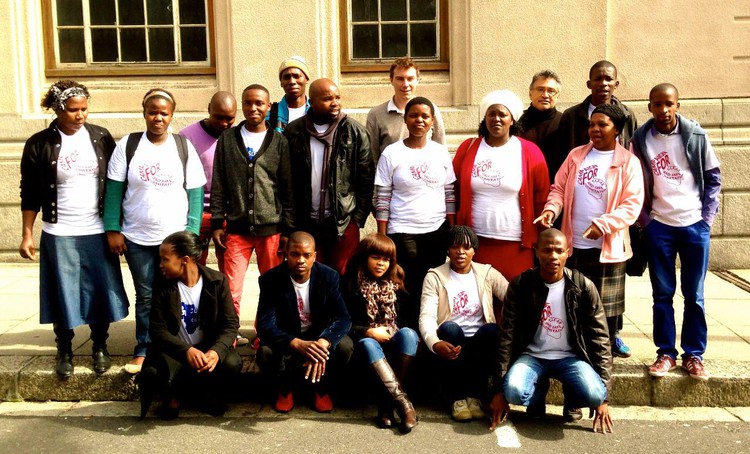 What does the Constitutional Court’s judgment on protests mean?

On Monday, after five years of court battles, ten people who protested without permission in 2013 finally could rest easy that they would not get criminal records. Here’s an explanation of what the Constitutional Court judgment in the case known as SJC10 means.

The state has the power and the duty to enact laws that allow people to exercise their fundamental rights. That means that the state has to give people the tools to enable them to protest, to assemble and to demonstrate. The Regulation of Gatherings Act of 1993 (Gatherings Act) was supposed to do just that: in its provisions, the legislature provided for the steps to be followed when people want to protest.

But, as the Gatherings Act itself states, it is a law that not only aims to make protests possible. It also wants to ensure that people exercising their right to protest do not unnecessarily infringe other people’s rights. The law should make protests possible, but also regulate them. It is a fine balance.

In August this year, ten activists and members of the Social Justice Coalition (SJC), asked the Constitutional Court to confirm that section 12(1)(a) of the Gatherings Act, as it stands, does not strike that balance. The provision, which makes it a criminal offence for a convener of a gathering to fail to give notice of the gathering, does not regulate the right to protest, they argued, but rather puts people off from convening or attending protests for fear of being slapped with a criminal record. The effect, they told the Court, was that the Gatherings Act was not encouraging people to exercise their right to peaceful demonstration. On the contrary, it made people fearful of exercising that right. The applicants asked the Court to find that a law that makes it unnecessarily difficult or threatening to exercise a fundamental right, like the right to protest, is unconstitutional.

On 11 September 2013, fifteen members of the SJC travelled from Khayelitsha to the Civic Centre in Cape Town for a peaceful protest. The number fifteen was significant: in terms of the Gatherings Act, a group of fifteen or fewer people intent on protesting in a public place is defined as a “demonstration”, while any group bigger than that is a “gathering”.

The members of the SJC decided to limit themselves to just 15 protesters that day in September to avoid having to give notice about the intended – and somewhat spontaneous – protest action which would likely have delayed their protest significantly. As their protest started, other people joined them, and, in the eyes of the law, a “demonstration” quickly became a “gathering”. While the protest continued entirely peacefully, police were summoned and requested the gathering to disperse. When the protesters refused, they were arrested.

The criminal charges brought against 21 of the protesters in the Magistrates’ Court were that, in terms of section 12(1)(a) of the Gatherings Act, they were all presumed to be conveners of the gathering and had all failed to give notice of the gathering. That, in terms of the Gatherings Act, is a criminal offence. They were also charged with attending a gathering that was “prohibited” because no notice had been given.

The second charge, of merely attending a gathering where the convener failed to notify the municipality, was dropped because it is no crime.

However, ten of the protestors, all found to be “conveners” of the gathering, were found guilty of the criminal offence of failing to notify the municipality of a gathering.

The ten protestors finally approached the Constitutional Court earlier this year asking it to confirm the Western Cape High Court’s finding that section 12(1)(a) of the Gatherings Act is an unconstitutional limitation of the section 17 right to freedom of assembly. The state and the Minister of Police opposed their application.

When the Constitutional Court is asked to decide whether a law places an unconstitutional limitation on a fundamental right, it asks two questions: First, does the law, in this case section 12(1)(a) of the Gatherings Act, make it harder for us to exercise our fundamental right in section 17. Second, does the state have a good enough reason to do that?

On the first question, the court said that “everyone is entitled to exercise the right in section 17 to express their frustrations, aspirations, or demands. Anything that would prevent unarmed persons from assembling peacefully would thus limit the right in section 17”. While the Minister argued that nothing in the Gatherings Act prevented anyone from protesting, the Court disagreed. The “pain of a criminal sanction” for simply not notifying the municipality of a gathering, must be a deterrent, it found. Worst still, it will not only deter conveners who face the possibility of a criminal charge. If no-one is willing to convene a gathering, there will be no gatherings for participants to attend.

But is the state justified in limiting the right to assembly in this way? In answering that question, the court first considers the nature of the right: how important is the right to protest in South Africa and how far must we go in protecting it? Reflecting on the history of authoritarian apartheid state that crushed protests violently, our Chief Justice wrote in the earlier Garvas case:

“The right to freedom of assembly is central to our constitutional democracy. It exists primarily to give a voice to the powerless. This includes groups that do not have political or economic power, and other vulnerable persons. It provides an outlet for their frustrations. This right will, in many cases, be the only mechanism available to them to express their legitimate concerns. Indeed, it is one of the principal means by which ordinary people can meaningfully contribute to the constitutional objective of advancing human right and freedoms. This is only too evident from the brutal denial of this right and all the consequences flowing therefrom under apartheid. In assessing the nature and importance of the right, we cannot therefore ignore its foundational relevance to the exercise and achievement of all other rights.”

Equal Education, as a friend of the court, emphasised the importance of protest for children who do not even have the ability to exercise their political rights through voting. For them, protest is truly the only means of participation in our democracy.

While the Minister of Police argued that notification of a gathering is important to allow for proper planning, it could not convince the court that criminalisation as a sanction for not doing so, is justified. It could provide no evidence that such a harsh sanction was limiting violent protests or criminal activity during protests because of a greater police presence, or indeed that it was saving the police money – all claims that they had advanced in defending the criminalisation of conveners.

While the court sympathised with the need for planning in the interest of public order and therefore for advance notice, it could think of various other means of encouraging conveners to give notice of gatherings without having to threaten them with criminal records. For example, administrative fines are often used in other countries to achieve the same objective.

But it is not for the court to tell the legislature how to achieve its aim of encouraging the conveners of gatherings to notify the municipality in advance of an intended protest. That will be the lawmakers’ job. What the court did find, conclusively, is that the Constitution does not allow a law to use the threat of a criminal record to force protestors to notify the municipality of an intended gathering of more than fifteen people in a public space.

As Acting Judge Petse wrote in Monday’s judgment: “People who lack political and economic power have only protests as a tool to communicate their legitimate concerns. To take away that tool would undermine the promise in the Constitution’s preamble that South Africa belongs to all who live in it, and not only a powerful elite”.