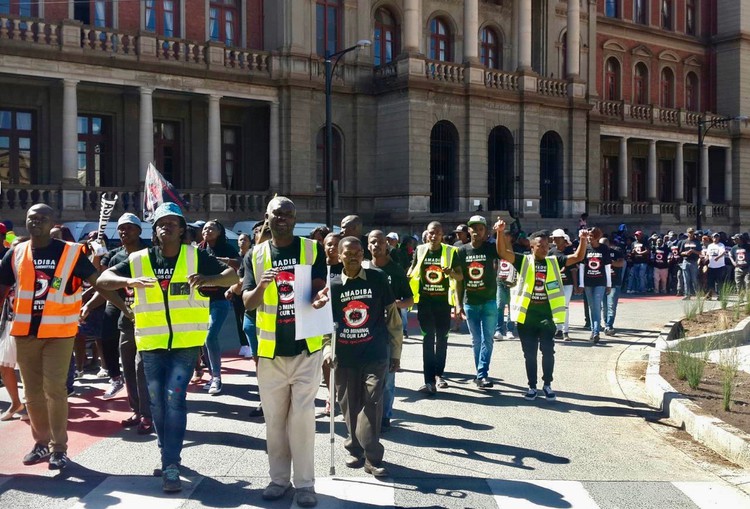 Gwede Mantashe is concerned about mining being halted, but the judgment is an incentive for the industry to change the way it operates

These are the members of customary communities — communal owners of the land in the former Bantustans. They are an estimated 16 to 20 million South Africans. Communal land is where the majority of new and expanding mining projects in the country are located.

The legislation that governs mining in South Africa, the Minerals and Petroleum Resources Development Act of 2002 (MPRDA), made the state the custodian of all mineral resources in South Africa. The MPRDA also provides that the Minister of Mineral Resources may grant a mining right to a mining company against the will of the land owner, and indeed, the Minister routinely exercises that right. Land owners cannot stop mining from happening on their land, even if it means that they are forced to leave their land.

That reality has been staring members of the Umgungundlovu community — often called the Xolobeni community, after the name of one of the villages in the area — in the face for more than a decade. The sands of the coastline where they have lived for centuries, is rich in titanium. For years, an Australian mining company, Transworld Energy and Mineral Resources (TEM), has attempted to get a mining right to conduct open-cast mining on an estimated 900 hectares. Their attempts have not yet been successful, because of the resistance of the community members who will lose their land to the mining.

The community has engaged in formal processes, protested, and litigated. But this resistance has come at a huge cost: some members of the larger Amadiba community who will not lose their land, want the mining in the hope that it will bring jobs and economic opportunity. The Chief of the area, once a fierce campaigner for his people against the mine, has changed his mind. This, the community members say, must have something to do with the vehicle and directorship that he received from TEM. Tensions within this community escalated to such an extent that an anti-mining community leader, Bazooka Radebe, was assassinated in March 2016. As a result, the then Minister of Mineral Resources instituted an 18-month moratorium on the granting of a mining right in the area.

Why would members of the Umgungundlovu community be willing to risk their lives, literally, in order to defend their land? Because, for them, land is not simply a place to live, much less an investment to generate income. These households and their ancestors have lived on the land for generations. The land is central not only to their livelihoods, through grazing, cultivation, tourism and the like, but to their very identity.

A household, called umzi, is more than a place of living. For the people of Amadiba, it is a symbol of social maturity and social dignity. It forms the basis of the relationship between the living and the dead, but also of the social fabric of the community today. You cannot relocate the community elsewhere without destroying that. The land is everything.

For this reason, members of this community and other customary communities like them have argued that they cannot be treated like other land owners who, when they lose their land, can be compensated by calculating the market value of the land lost. The value that land has to a customary community cannot be calculated in rands and cents. For that reason, no-one should be able to take the land without the community’s consent. They must have the right to say no, argue the residents opposed to mining.

There is even a piece of legislation that guarantees them that right to consent, namely the Interim Protection of Informal Land Rights Act (IPILRA) of 1996. The Act provides that people with customary rights to land, amongst others, have “informal rights” for the purposes of the Act and that no-one with an informal right to land can lose that right without their consent. What is more, they argue, international law recognises that indigenous peoples have the right to free, prior and informed consent over their land.

The government and mining companies have rejected this argument for years. They say that the MPRDA only requires that a land owner be consulted about the impact of the mining prior to the granting of a mining right. Consultation does not give the land owner the right to say no. It merely entitles the land owner to be notified of the planned mining and to raise objections – objections that may be ignored. They argue that IPILRA cannot be used to stop mining, because the MPRDA does not give land owners the right to refuse mining.

The North Gauteng High Court was finally faced with this very dispute when the Umgungundlovu community approached it in April this year asking for an order declaring that the Minister must seek their consent before granting a mining right over their land. In deciding the issue, Judge Annali Basson emphasised the special place that customary law has under our Constitution, in particular because of the historical discrimination against indigenous forms of law in South Africa. The rights that South Africans have under customary law, including the rights to land, require special protection precisely because these rights have for so long gone unrecognised and ignored.

Judge Basson rejected the argument of the Minister of Mineral Resources and TEM that the MPRDA trumps IPILRA. They must be read together, she found, which means that the Minister must seek the consent of the affected land rights holders before granting a mining right.

In response to the judgment, Gwede Mantashe, Minister of Mineral Resources, said that the Department will look to appeal it as “I suspect within the next ten years the right to issue licenses is systematically shifting from government to communities and if we do that there will be no mining”.

The statement suggests that government knows that the communities who are most severely affected by mining are sceptical of its benefits, but the state still continues to issue licenses at will. More than anything, this statement reveals the significance of the judgment: if communities do not have the right to reject mining, the industry will never have the incentive to change the way it operates in order to make their presence attractive to mine-hosting communities.