Abahlali leads hundreds in march against corruption in Durban 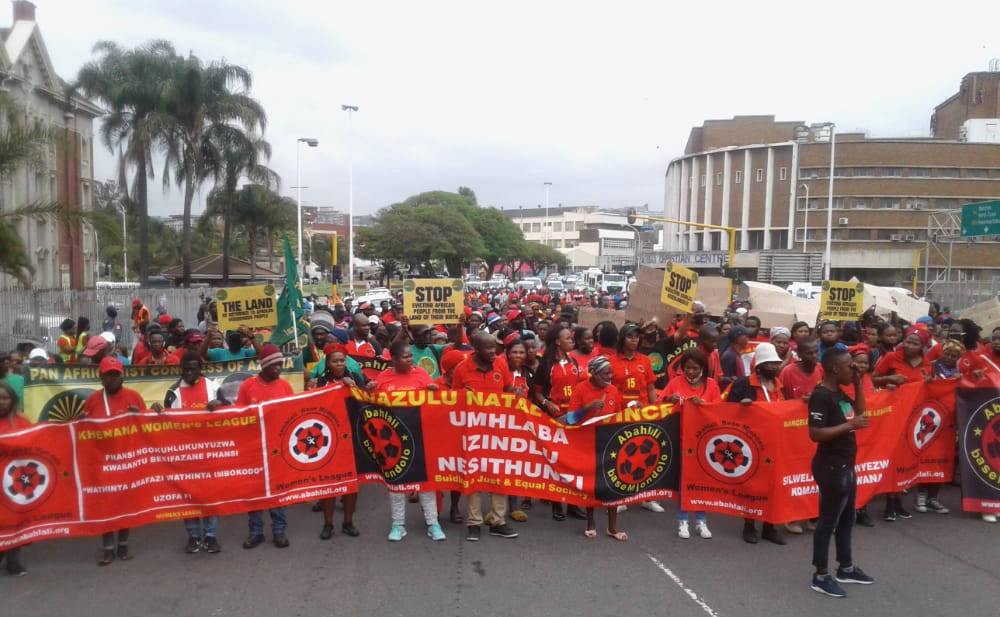 Abahlali leads hundreds in march against corruption in Durban

“The thieves must be called to justice” says ABM deputy president

Hundreds of members and supporters of Abahlali BaseMjondolo (ABM) marched in Durban on Monday protesting against corruption and evictions. Dressed in their red regalia, they marched from King Dinizulu Park in Berea to the Durban City Hall, where they handed over a memorandum addressed to KwaZulu-Natal Premier Sihle Zikalala and MEC for Cooperative Governance and Traditional Affairs Sipho Hlomuka.

ABM deputy president Mqapheli Bonono said the money must be recovered and redirected “to support the water and sanitation needs of our settlements and our townships under the transparent authority of freely elected community structures”.

“The thieves must be called to justice,” he said.

Abahlali handed over three memorandums, two to the officials from the office of the premier and the office of the MEC, and another to the City. Senzo Mzila, KZN Cogta spokesperson, said the department was committed to probing any allegations of corruption made against municipalities.

Abahlali also wants families which it says were illegally evicted from their settlements during the Covid-19 lockdown, to be compensated and reinstated.

“All government officials who ordered and carried out illegal evictions must be called to justice,” he said.

ABM says the eThekwini Land Invasion Unit “has killed people” and must be abolished.

They also want officers of the Calvin and Family Security firm “called to justice” for their actions during the evictions and for the company’s tender to be investigated.

ABM wants full disclosure of the housing budget and the list of beneficiaries in eThekwini and the province.

“We demand decent housing, safe neighbourhoods and the provision of all basic services. Many of us have already been living for too long in RDP houses but without any tenure security. Without this security, councillors and party committees can remove us from these houses at any time,” said Bonono.

Verushka Memdutt, secretary of the Coalition of the Poor, a Durban-based collective comprised of ABM, Ubunye BamaHostela, Poor Flat Dwellers Movement, South Durban Community Environmental Alliance, R2K and Street Vendors Network, said, “Most of the people, especially the street vendors, live in informal settlements … We must stand together and unite to eradicate corruption and other issues affecting our livelihood.

“We speak for ourselves and direct our own struggle. We have no hidden agenda. We have been mobilised by our own suffering and our hopes for a better life, a better South Africa and a better world,” said Bonono.