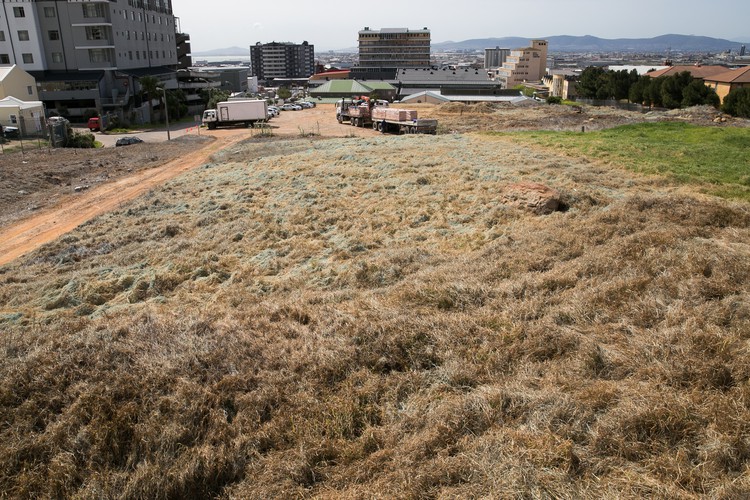 Land and housing legal support organisations Ndifuna Ukwazi (NU) and Reclaim the City (RTC) say the City of Cape Town is moving too slowly on its promises to create affordable housing.

In July 2017, the City announced that 11 pieces of public land in the city, Woodstock and Salt River would be used to develop social and transitional housing. Since then only the Pickwick Road Transitional Housing development – offering temporary housing to nineteen families – has been completed. None of the other ten sites “has even broken ground” according to NU.

The 11 pieces of state-owned land are located in Pine Road, New Market Street, Fruit and Veg Drury Street, Upper Canterbury Street, Woodstock Hospital, Woodstock Hospital Park, James Street, Dillon Lane, Salt River Market, Pickwick Road Transitional and the remainder of Pickwick Road. (Pictures of the sites can be viewed here.) The land has not been released for six of the sites.

“While some of the projects have shown signs of progress (including the Pine Road, Dillon Lane and Pickwick Road projects), most have stalled or made no apparent headway,” says NU.

“The government’s housing provision has done little to disrupt spatial inequality because the government has built homes far away from well-located areas where land is cheap. It has also been too slow.

“The massive amount of people that need homes means that the City believes it will take at least 70 years before it can give everyone a home,” the statement reads.

Speaking at an online public meeting on Wednesday, NU director Mandisa Shandu said that given the urgent and escalating need for affordable housing, the slow pace of progress is concerning.

“In Cape Town alone, the housing backlog is estimated close to 400,000 qualifying households and there are possibly a lot more than that. What that means is that more homes need to be built at a faster rate, by both the state and the private sector.”

“In 2019, the average sale price for a home in Cape Town was R1.5 million – a price that only 5% of the families living in Cape Town can afford. This means that ordinary people are struggling to afford their homes in increasingly gentrifying neighbourhoods,” said Shandu.

Bevil Lucas, of RTC, said, “The crises faced by people is that land is being identified, however, it does not move beyond the identification.”

“We’re sitting with a legacy of apartheid that has to be undone and can be undone. However, it’s the failure of the political authorities to exercise the political will to ensure the delivery of mass housing.

“There was an attempt in 1994 with the RDP programme, however, that was insufficient. The crisis has now almost doubled from what it was,” said Lucas.

Researcher Nick Budlender said a lack of funding continues to be one of the biggest barriers to making progress on social housing.

“The subsidies that Social Housing Institutions (SHI) receive from government are too small … As the cost of building, materials, labour, and all the different things needed to make a development happen increase, the SHIs continue to receive the same amount of money to solve a bigger problem.”

“There isn’t a clear process that is understood by people in different levels of government.

“Despite the fact that the main contribution municipalities are meant to make to social housing is by providing land cheaply and at a discount. There isn’t actually a clear obligation for them to do so, and that creates uncertainties and opens up a space for delays.”

He said certain processes that have to be followed such as environmental impact assessments introduce further delays because they are inefficient and rely on intergovernmental collaboration which “we struggle with in South Africa”.

“Budlender said that for people in government to be comfortable with the fact that it takes so long to develop affordable housing was unacceptable.

In a statement, the Mayco Member for Human Settlements Malusi Booi said varying levels of progress had been made on the 11 pieces of land in question.

Booi said that since 2009, the City had pursued the release of national government mega-properties for mixed-use development. This includes Culemborg in the city, Wingfield along the Voortrekker corridor, Youngsfield in the south, and Ysterplaat, adjacent to Century City.

“To date, the national Ministers of Human Settlements and Public Works seem to have made no progress in releasing the largest pieces of well-located land in Cape Town, signalling a lack of political commitment to enabling affordable housing,” said Booi.

Between the current 2021/22 and 2023/24 financial years, the allocated capital budget for City’s human settlements projects is approximately R3.3 billion in total. Of this, almost R2 billion is expected to be spent on formal subsidy housing, while approximately R1.3 billion is earmarked for informal housing and new accommodation types to address growing informality, Booi said.

However, the allocation of grant funding has remained “inadequate at best” caused by the mismanagement of resources at a national level, he said.

“There is increasingly less grant funding to go around, with R118 million cut from the City’s Urban Settlements Development Grant last year alone.”

He said under the City’s new human settlements strategy, all suitable municipal land continues to be assessed.

“Social housing, as part of the suite of affordable and subsidy opportunities, and as a means to alter apartheid spatial planning, cannot be viewed in isolation. There is much work underway and a clear understanding of the road ahead and what is required,” Booi said.