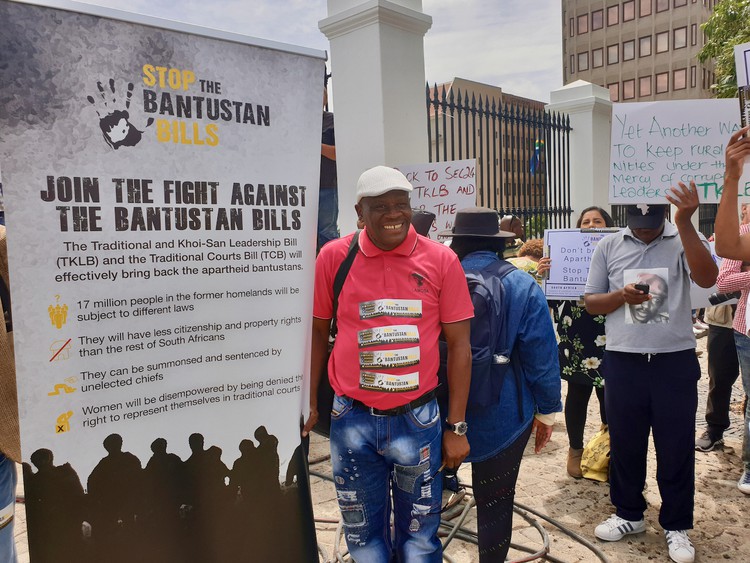 This bill does not include the people, says Land Access Movement

The National Assembly has approved the Traditional and Khoi-San Leadership Bill (TKLB) much to the disappointment of several rural organisations.

The bill, approved yesterday in Parliament, has been supported by the ANC and the UDM, but opposed by the DA, EFF and COPE.

According to Stop The Bantustan Bill coalition, “Clause 24 of the TKLB would give chiefs and their councils the power to sign over your land, including your family graves, your fields and even your homes, to mining companies, large farms, developers and casinos. They will be able to do this without asking your opinion, let alone your permission. They will make millions while you lose your home.”

A small group of people opposing the bill picketed outside Parliament on Tuesday afternoon holding posters with: “Phantsi nge TKLB” (Down with TKLB) and “Don’t bring back apartheid laws”.

One of the picketers, David Ramohanoe, co-ordinator for the Alliance for Rural Democracy, a group of civil society organisations promoting human rights and democracy, said the bill was a return to apartheid laws.

“What we are saying as communities is we do not want the bill because it will give the chiefs power to enter into agreements and deals. And most of the time, these deals that they enter into do not favour communities. There is no inclusion. They should not get into deals on our behalf. The chiefs are not landowners, they are just custodians of the land. So how they can they make decisions about land that is not theirs?” asked Ramohanoe.

Acting director of the Land Access Movement of South Africa Emily Tjale said, “We do not want the President to sign this bill because it does not include the people. It takes us back to the apartheid system. We are not saying we don’t want laws, we are saying that we want laws that will protect us as people. The rights are all on the traditional council [side] and when deals are made and signed, the benefits go to them and not the people.”

Aninka Claasen, senior researcher at the Land and Accountability Research Centre, told GroundUp that the bill would be challenged by the rural and Khoi-San communities. Legal advice would be sought.