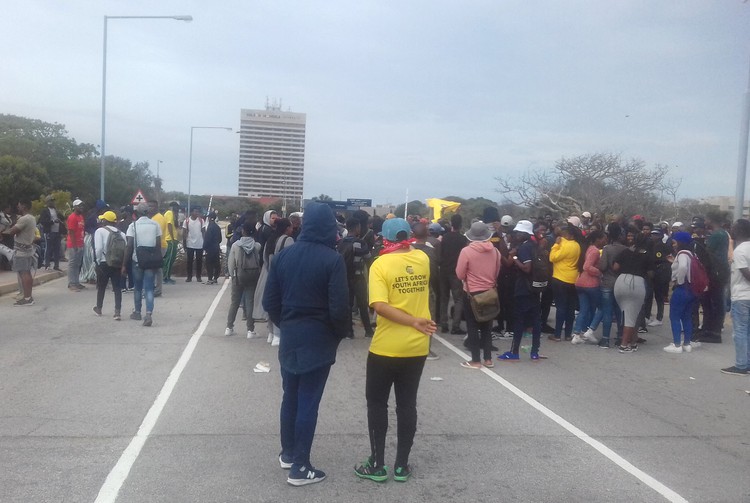 To prevent disruptions, university says it will enforce interdict that it obtained in 2018

Protesting students at the Nelson Mandela University in Port Elizabeth have vowed to paralyse operations at the institution until their grievances have been addressed.

The university was shut down on Wednesday and Thursday by members of the South African Students Congress (SASCO), who claimed some people have not been registered for this academic year because of financial problems, while others have failed to get accommodation.

SASCO also claimed some students failed their academic studies last year because of the late arrival of their financial aid from the National Student Financial Aid Scheme (NSFAS). The organisation argues that these students spent the better part of the year struggling to get their money paid and therefore couldn’t study.

SASCO president Asemahle Gwala, who is a political science honours student, said that although there were a number of reasons for the protest, they were linked. “If you don’t have money to pay the university, you won’t register and you also don’t get accommodation. Some students are sleeping on empty stomachs while others are sleeping in open spaces.”

“Some students had to go for months last year without money for food,” he said, and this affected their studies.

ANC Youth League regional chair and third year Public Management student, Siviwe Ngaba, said the problem started after the government declared free education to students from poor families. While he welcomed the move, he said it should have been managed better.

Ngaba said the dissolution of the NSFAS board in August 2018 caused chaos. “The Nelson Mandela University received a record second-most number of new applicants in the country after UNISA. This affected both old and new student applicants who now depended on NSFAS. Many students failed to get their allowances on time and ended up struggling to pay for food and accommodation,” he said.

Nelson Mandela University spokesperson Zandile Mbabela said the university activated a court interdict on Wednesday that was obtained in June 2018. It prohibits protesting students from barring people from accessing the university. The university also announced that lectures had been suspended until further notice.

Mbabela said the university had been working with the student leadership to have a “smooth start to the 2019 academic year”. This included looking at registration, residence admissions, and financial aid. She said a “working group” was set up in late 2018, and that it includes both management and the student leaders.

The most recent meeting of the group was on 5 March. “There have not been any issues that we have not been able to address or respond to,” she said. There were no issues raised that could have resulted in an interruption of operations. She said that management is committed to “ongoing engagement with students through the SRC”.

Mbabela said any contravention of the interdict will place people in contempt of court and may lead to both criminal and disciplinary action.