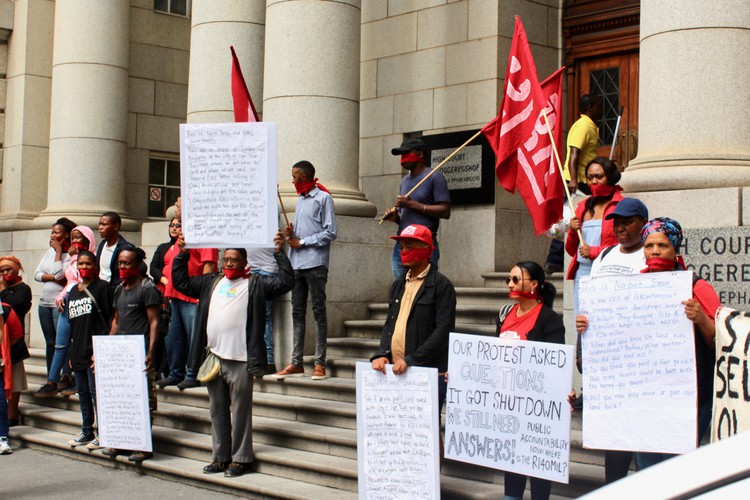 Activist groups Reclaim the City (RTC) and #UniteBehind have opposed an interdict granted in December to Growthpoint Properties. RTC claims that Growthpoint misled the court when it made its application for an urgent interdict and it used a private security company to suppress the organisation’s right to protest.

About 30 RTC members protested silently outside the Western Cape High Court on Monday while attorney Jonty Cogger filed the papers. The protesters wore red regalia and had their mouths tied with red cloth.

On 4 December, RTC — supported by #UniteBehind and the Social Justice Coalition (SJC) — protested on the Foreshore in Cape Town by building shacks on vacant land known as Site B.

Site B had been sold by the City to Growthpoint in 2016 for R86.5 million. RTC says this was well below the market value for the company’s proposed 46,000m2 development.

Cogger told GroundUp that when Growthpoint applied for the interdict it had a duty to disclose all material facts. He said Growthpoint lied; it knew RTC was holding a protest and not a land invasion. It also brought its application without informing the protesters.

“When you do that you have an utmost duty to disclose all your material facts. If you don’t, the court has discretion to overturn that order,” said Cogger. “This case touches on issues like: Can you protest on private property? Can you protest in church if you want to raise problems happening in that church? What are the limits of holding a private party accountable for their actions?”

“Growthpoint knew us and the reason for the protest, but deliberately misled the court to ensure that we could not defend ourselves. In the late afternoon, Growthpoint secured its interdict and enforced it by deploying a private security company called Vetus Schola. Vetus Schola arrived in armoured vehicles and carrying automatic rifles to shut down the protest,” RTC said in a statement on Monday.

RTC said Growthpoint told the court that RTC members were planning a large scale “invasion” to settle on the land permanently and enrich themselves by charging fees for plots.

It said Growthpoint had also claimed that people who are homeless in the area are those who have an “unfortunate dependence on alcohol and other substances and their homelessness is accordingly situational rather than as a result of economic conditions or lack of space”, but Growthpoint had no evidence for this claim.

RTC said it was unacceptable that Growthpoint used a private security company to intimidate and threaten peaceful protesters. The interdict should have been enforced by the South African police, not private security.

GroundUp contacted Growthpoint. At the time of publishing no reply had been received.

The matter will be heard in court on 3 June.

RTC also criticised the City of Cape Town: “The City promised a forensic investigation into the botched sale of Site B, but no further action has been taken for far.”

However, Luthando Tyhalibongo, spokesperson for the City, told GroundUp that a forensic investigation is underway and it is being treated as a priority matter. “The City cannot commit to time lines as it could hamper the investigation,” he said.