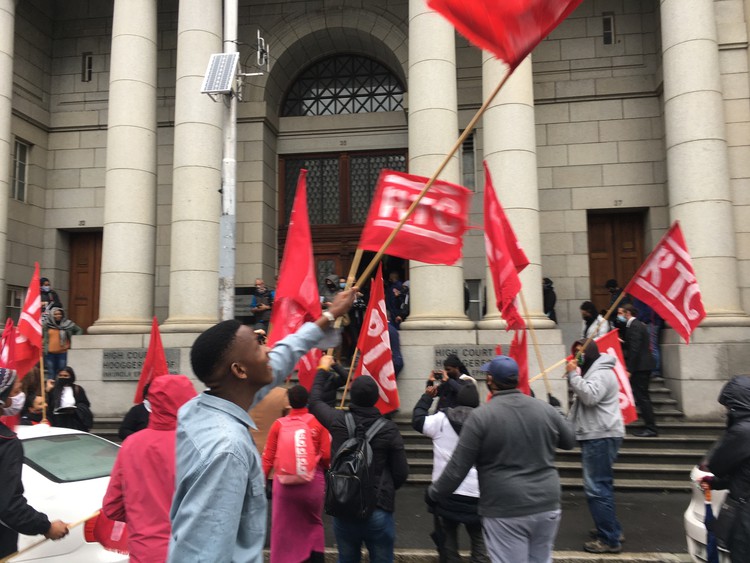 Judges Patrick Gamble and Monde Samela have ruled in favour of housing activists in the landmark Tafelberg case. In a judgment over 200 pages long, Gamble and Samela set aside the sale of the site of the former Tafelberg Remedial School in Sea Point by the Western Cape Provincial Government to the Phyllis Jowell Jewish Day School in November 2015 for R135 million, and the subsequent decision of the Province in March 2017 not to withdraw the sale.

The applicants in the case, led by the land and housing legal support organisation Ndifuna Ukwazi, challenged the sale of the Tafelberg site and the City of Cape Town and Western Cape government’s affordable housing policy.

On Monday morning Judge Gamble swiftly delivered the judgment alone beneath the vaulted roof of Court 1 in the Cape High Court.

Read the judgment and its annexure.

The provincial government was found to have incorrectly applied the provisions of the Government Immovable Asset Management Act of 2007, in not offering the Tafelberg site to the provincial department of housing first.

The province was also found to have erred in its decision not to designate the Tafelberg site as falling within a restructuring zone according to the Social Housing Act of 2008.

The court issued a declaratory order stating that the City of Cape Town and the Province were in breach of their constitutional obligations to advance access to affordable housing, that there were not suitable policies in place to facilitate and promote access to affordable housing, and that following these constitutional breaches, the City and Province “had not taken adequate steps to address the legacy of apartheid spatial planning in central Cape Town and its surrounds”.

Both the city and provincial governments were ordered to create a combined policy to address their constitutional breaches by 31 May 2021.

A second application by the national Minister of Human Settlements was added to the first application from Ndifuna Ukwazi. In this matter the court found that the provincial government was obliged to consult the national minister about the decision to sell Tafelberg, and that former Western Cape Premier Helen Zille had been in breach of her duties to promote cooperative governance in refusing to consult with the Minster about the sale of the land.

At the heart of this case are two different visions of how this high-value piece of public land in the Cape Town should be used. Housing activists want a significant part of Tafelberg to be used for affordable housing for poor people that travel to Sea Point daily, like domestic workers and gardeners. The city and provincial governments wanted to sell the land to a developer to build a private school.

Outside the court, access to which was limited due to Covid-19 regulations, activists for the land and housing movement Reclaim the City had gathered to witness the ruling, despite the icy rain.

Song and celebration erupted at the announcement of the result.

Ndifuna Ukwazi Director Mandisa Shandu, addressing Reclaim the City activists, said, “It’s been long. This case was started in 2016, but the struggle that we fought for started four hundred years ago … At the core of it, [the Tafelberg case] is about dignity, it’s about belonging, and it’s saying to the status quo, no more.”

Shandu has been involved with the case as an attorney for Ndifuna Ukwazi since the beginning.

Reflecting on what the case meant, she said, “This was our flagship campaign when we started to argue for spatial justice in Cape Town. The Tafelberg property was a significant parcel of land because it had previously been earmarked for housing. That set up the case we needed to shift, initially symbolically, but now realistically, the ideology of how land is used in Cape Town.

“Getting people to articulate demands about a better vision, a different city, and land being a mechanism to undo the legacy of spatial apartheid – that is what this case has brought us. We took a risk, with radical legal arguments, and we won.”

Councillor Malusi Booi, the City of Cape Town’s Mayoral Committee Member for Human Settlements told GroundUp that the City is considering the judgment.

Premier Alan Winde said in a statement on Monday afternoon: “We will be studying the judgement, which is over 200 pages long, in detail and in consultation with our legal counsel and that of our custodian Public Works Department before determining any next step in this matter.”

“The Western Cape government is deeply committed to addressing the need of residents for affordable housing and redressing the spatial legacy of apartheid. In this regard, we have a year-round build programme developing a range of affordable housing options which are close to economic and educational opportunities and public transport routes, and which will allow residents to build lives that they value, for themselves and for their families.

“Among the projects which seek to achieve the goal of creating dignified and connected living spaces, are the Conradie Better Living Model development in Pinelands, and social housing opportunities incorporated into the development of the Helen Bowden Nurses’ Home site in the Somerset precinct. The Helen Bowden site has already been rezoned to accommodate the intended development, but progress has been completely stalled by the continued occupation of the site, as initially encouraged by Reclaim the City – and which occupants have since refused to vacate.

“The Department of Human Settlements is also working hard to address historical biases in home ownership and to simplify and streamline the housing database process to deliver housing to those most deserving, despite significant cuts to national grant funding for housing.”

This article was updated after publication with comments by the City of Cape Town and Western Cape government.