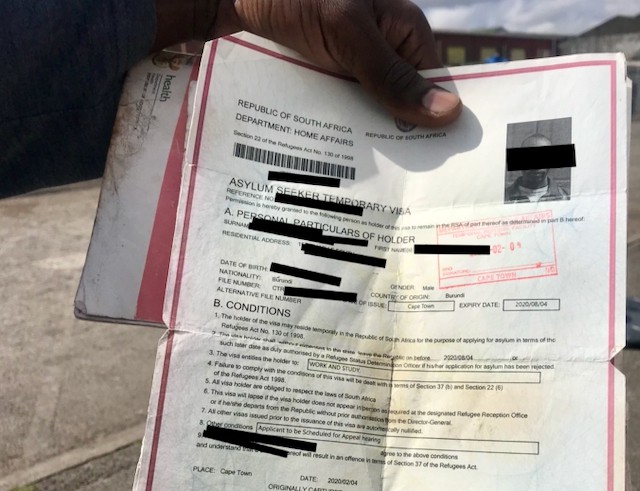 Asylum application backlog set to grow, with Refugee Reception Offices closed since the start of the Covid-19 pandemic

The closure of Refugee Reception Offices (RRO) since the Covid-19 lockdown last year has left asylum seekers vulnerable to arrest and deportation. The offices remain closed for new asylum applications and in-person renewal of permits that expired prior to March 2020.

“Many newcomer asylum seekers are therefore at risk of arrest, detention, deportation and are struggling to access basic services due to their lack of documentation,” said Attorney Jessica Lawrence, of Lawyers for Human Rights (LHR).

Lawrence said that during a recent meeting, a Home Affairs official said that newcomer asylum seekers should all have been issued with an asylum transit visa at the border, which would normally be extended by an immigration officer later.

“Asylum transit visas are only valid for five days. Though he did not say this, it was clear that he therefore deemed this as appropriate documentation for newcomer asylum seekers pending the re-opening of the RROs,” she said.

GroundUp was unable to get clarification from Home Affairs on asylum transit visas, when its RROs will reopen, and when it will start assisting new asylum seekers.

It is unclear where this leaves refugees who arrived after March 2020.

Victor Chikalogwe of People Against Suffering, Oppression and Poverty (PASSOP) said thousands of people have arrived in the country since March 2020.

He said PASSOP has assisted about 200 newcomers to date. The organisation has been issuing “newcomer letters” since the closure of the Cape Town reception office in 2012.

He said the letter could be presented to law enforcement and immigration officers and basic service providers while the newcomer was raising money to travel to Pretoria, Durban or Musina to apply for asylum papers when these offices opened. “We thought newcomer numbers would decrease because of the pandemic but people are still coming,” he said.

All refugee permits that expired on or after the national state of disaster was declared in March 2020 are considered valid under a blanket extension until 31 December 2021, according to SAMCO. But many institutions, from banks to schools, do not seem to accept this when presented with expired documents.

Home Affairs activated an Online Renewal System in April 2021. By 8 September, it had extended 24,333 Section 24 (refugee status) and 69,185 Section 22 (asylum seeker permits), the department said in a statement.

“The extension applies to people who applied for waivers and holders of asylum seeker visas/permits or refugee status. Holders of such visas are permitted to remain in the country under the conditions of their visas until the expiry of their applicable extension. Those wishing to be repatriated to their countries within this period can depart without being declared an undesirable person,” said Home Affairs.

Chikalogwe said PASSOP has helped 75 people in September who never got responses after submitting their documents online for renewal. “The number of people seeking online renewal help is increasing. Last week, I served three people within a period of four hours.”

A volunteer at PASSOP, who asked not to be named, said he submitted his documents in June for online renewal and is still awaiting feedback. When he tried to resend his documents in July he received an email from the Port Elizabeth office saying, “Kindly refrain from sending multiple requests.The office will attend to your request immediately when it is open. It is currently closed due to Covid alert level 4.”

The non-processing of any new refugee applications since March 2020 could have serious implications for South Africa’s refugee response.

PASSOP and LHR are sceptical that Home Affairs will be able to clear the already massive backlog in South Africa’s asylum system from before the pandemic.

In March, Home Affairs, with US$9.6 million in assistance from the United Nations High Commissioner for Refugees (UNHCR) launched the asylum backlog project to clear in four years what was going to take 70 years (at the department’s pace) to process.

Sarah-Jane Savage, from UNHCR, said the backlog clearance project started on 1 April. The current phase, the first, involved recruiting and training 37 new members for the appeal authority to add to Home Affairs’ existing three officers. The appeals of 153,391 people need to be heard.

It is therefore too soon to tell if the goal of clearing the backlog by 2024 will be achieved. The project was also meant to prevent another backlog building up in the meantime. It appears this is not happening.

The quality of decision-making on asylum cases by Home Affairs “is resulting in more people actually joining the backlog”, says the manager for LHR’s Refugee and Migrant Rights Programme, Sharon Ekambaram.

The LHR says it has seen an increase in rejections of people from Ethiopia and the DRC. Individual assessments appear not to be done. LHR is seeing Refugee Reception Officers simply duplicating the reasons they give for rejecting one person’s asylum claim on different individuals’ applications.

Hlengiwe Mtshatsha, attorney at LHR, said the backlog is building up again because asylum seekers are referred back to be re-interviewed every time the High Court on judicial review overturns a decision on their status.

Mtshatsha said that they have noticed that people who applied for permanent residency will get a notice of intention to withdraw their refugee status or in some cases a withdrawal notice. They have 30 days to appeal. After that, they lose their refugee status and are classified as “illegal foreigners”, and will be notified to leave South Africa within 14 days.

Chikalogwe said appeals against the withdrawal of refugee status were also piling up.

GroundUp has tried numerous times since 16 September to get clarity from Home Affairs on a number of issues addressed in this article, but to date no clarification has been forthcoming from the department.