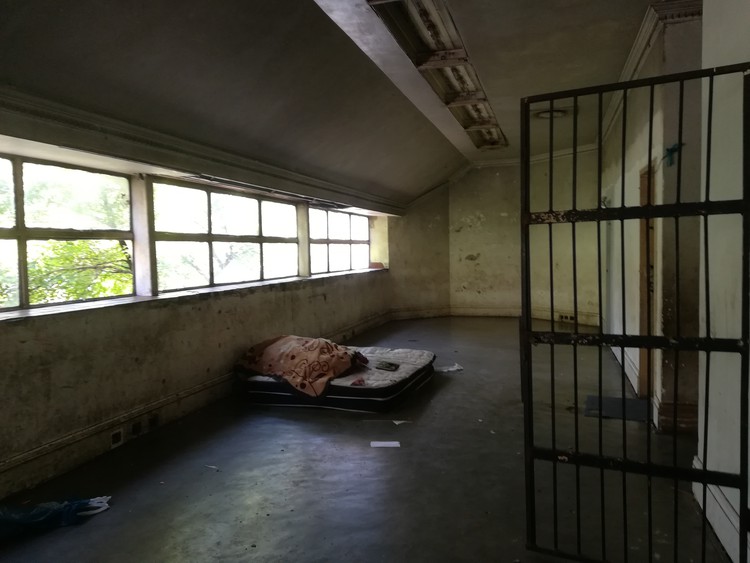 Municipality has missed deadline to find accommodation for Hillbrow residents, but Johannesburg official says backlog is the fault of past administrations

“It’s difficult because we are living in fear … most of us have children and at any moment we could be evicted and left on the street,” says Thulisile Ngubane, 40, a resident of Hillbrow, Johannesburg.

Ngubane lives with her husband and four children in a ground-floor room in Ingelosi House, a privately owned building that was occupied after it had been left vacant for a few years.

Ngubane moved into the building after her husband, who was the only breadwinner, lost his job. She says they could not afford rent elsewhere.

The building has three floors with 21 rooms and about 90 residents. When GroundUp visited the building, it was severely dilapidated. All the residents share two toilets on the ground floor.

The showers and bathtubs were not functional, the windows were broken and one of the two staircases had collapsed. The electrical wires were exposed in the corridors and parts of the building were in complete darkness.

Ngubane currently pays about R500 a month for rent. “Rent is more expensive out there. It will be more than R1,000 which we just cannot afford … Most of us here are unemployed and we still need to send our children to school and put food on the table for them.”

Like most of the residents, Ngubane says, her family will be left homeless if they are evicted from the building with no alternative accommodation.

This followed a ruling by the Gauteng High Court in April last year that the City should provide alternative accommodation close to Ingelosi House by the end of October 2018. The City has not provided accommodation to date. SERI is now asking the court to give the City officials two months to comply with the April order. If they fail to comply, SERI intends to institute contempt of court proceedings.

“There’s nothing that makes someone act like a threat of imprisonment … this is a last resort and we are prepared to see it through. In other words, if it means that we’ve got to send the mayor to prison, that’s what we intend doing,” says Thulani Nkosi, a lawyer from SERI.

After the building was illegally occupied in 2011, the property was purchased and the owner was granted an eviction order by the Gauteng High Court. The residents then approached SERI for legal representation to challenge the order.

Nkosi said SERI had appealed the eviction order because the court had not been provided with all the information about the personal circumstances of the residents such as their income, living expenses and means to obtain alternative accommodation.

“Until such time as the court has at its disposal this information, whatever eviction order it makes would not be just and equitable because ultimately it was going to lead to homelessness,” Nkosi said.

SERI won the appeal and the court ordered the City to establish the personal circumstances of the residents.

The City agreed that the residents would be left homeless but said in its court papers that it was struggling to provide alternative accommodation because the high demand for Temporary Emergency Accommodation (TEA), especially in Hillbrow, greatly outweighed the City’s resources.

“The overwhelming and ever increasing demand for TEA has resulted in a severe backlog in the creation of TEA facilities,” said the City.

The City’s Director of Housing Thabo Maisela told GroundUp that there are about 8,000 households dating back to 2010 that need TEA. He said the backlog was caused by the lack of action by the City when it was first mandated by the court to provide alternative accommodation.

“The owners wanted their buildings back and the City’s approach was to say ‘it’s not our business; it’s the business of the private landlord and the residents and we should not get involved’… Had we been proactive at the time, we probably would not be sitting with this [backlog],” Maisela told GroundUp.

Despite the high demand for TEA, Maisela said the City would have to accommodate the residents of Ingelosi House because of the April 2018 judgment, “even though it’s somewhat of a queue jump”.

He said the City had identified two buildings, Fraser House and 106 Claim Street, in the city centre for the Ingelosi residents but was still considering whether this was a viable option.

To counter the backlog and high demand, Maisela said the City planned to focus on providing TEA facilities this year. “The buildings that were prioritised for low income housing for this financial year, we have taken the decision that all of those buildings will now be used for TEAs… We are no longer playing around. We now mean business when it comes to TEAs,” said Maisela.

Maisela said he could not provide an exact date when emergency housing would be available for the residents of Ingelosi.